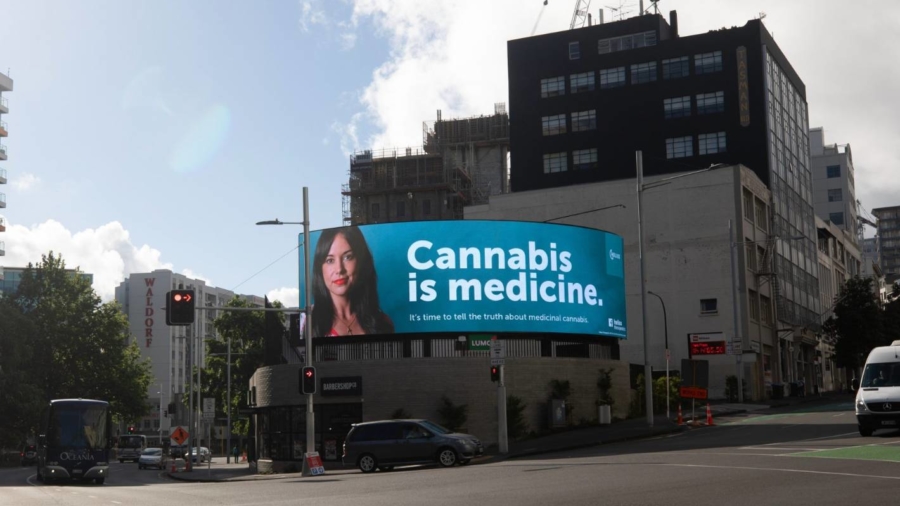 A billboard campaign promoting cannabis as a medicine has sparked a fierce debate including complaints to the Advertising Standards Authority.

But Hilary Souter of the ASA said three people had laid formal complaints so far.

“In broad terms, people are expressing concern whether or not it’s legal to promote medicinal cannabis – that’s obviously not an issue the ASA can deal with – and the other matter that people are raising is about children. The fact that it’s a billboard medium means it’s got an unrestricted audience.”

One Stuff commenter, “Dr Rubber,” said he had complained to the ASA even though he was a marijuana user, because he was worried children would get a false impression about cannabis.

“Derivatives and parts of it can be used medicinally, but there’s other things that go on with smoking cannabis that aren’t ideal, like psychosis or anxiety, depression in certain users.”

“To me, I liken that to saying opium is medicine. Just because we use a part of it for medicinal purposes…”

The commenter said he had dropped out of school a year after being introduced to cannabis at the age of 14 and blamed it for setting him on a bad path. He didn’t want that for his kids, he said.

But a blogger whose son needs cannabis to control his life-threatening seizures says she pleased to be part of Helius’ public awareness campaign.

Katy Thomas, whose son has a rare form of epilepsy, shooting an ad for Helius Therapuetics’ cannabis awareness campaign.

​Katy Thomas’s four-year-old son Edward has a rare form of epilepsy which is resistant to anti-epilepsy drugs. Thomas found during a seizure that cannabis had an immediate effect on Edward and spent a year going from doctor to doctor, trying to get a prescription for him.

She said the family had just marked a year without a night at hospital.

At the moment, she said she had to import the right type of cannabis for Edward before it wasn’t present in New Zealand, at great cost. But she hoped a local market and Government funding might bring down prices for others.

“The biggest issue any medicinal marijuana patient is not only access in the literal sense, getting someone to prescribe it to you … there’s also an access issue around funding, because it’s not currently funded, so the price is incredibly prohibitive.

“The idea that there might be a local producer not only increases the number of products that are available to patients, because right now it’s very restrictive.

Do you think it’s high time New Zealand legalised cannabis? Or only for medicinal use? Or maybe the drug should only be decriminalised?

“I really feel that there is definitely a growing section of society that wants to take charge of their own health.”

​Paul Manning, Helius’ executive director, said the campaign was designed to heighten awareness and remove the stigma of using cannabis for medicinal reasons.

“The truth is, it will be everyday people who use medicinal cannabis, which will soon become a very mainstream product.”

Helius has no products to sell yet because the regulations are still being drawn up, so Manning said the company’s current focus was on research and education.

With regard to the ASA complaints, Manning said it was a “stretch” to suggest that a billboard was going to encourage children to start smoking.

“We’re a Kiwi start-up researching and developing health products  – products that Parliament now supports, as do the overwhelming majority of New Zealanders.

“This is about encouraging education and creating safe, regulated medicinal products which will soon be available for hundreds of thousands of sick Kiwis who desperately need them.”

Paul Manning says the public still needs to guide regulations for medicinal cannabis which will be drawn up next year.

As well as permitting a medicinal cannabis industry, Parliament last year gave doctors the ability to prescribe cannaboidial (CBD) products to patients without needing approval from the health minister.

However, the ministry still has to consult on the regulations, licensing rules and quality standards which medicinal cannabis manufacturers would have to meet. Helius expects to have products available to patients by 2020.

Other Kiwis in Helius’ campaign include medicinal cannabis advocate Pearl Schomberg and Emmelene Pryce whose child suffers from epilepsy.

Comments are now closed on this article.